I downloaded the Windows 10 Technical Preview and gave it a test drive. Overall it runs fast, brings back the Start Menu with tiles, has transparency lacking in Windows 8, and runs well. It has a multiple desktops feature, similar to that offered in Linux. But it seems better designed in Linux.  Windows Media Player played my MP4 files fine and appears less crippled than in Win8. I did run into some compatibility issues, as Avast would not run on it. So used Avira instead.  Otherwise it was very stable. There will no doubt be more changes, as we get closer to release next year. Below is a screenshot and a link where you can get it. Enjoy. 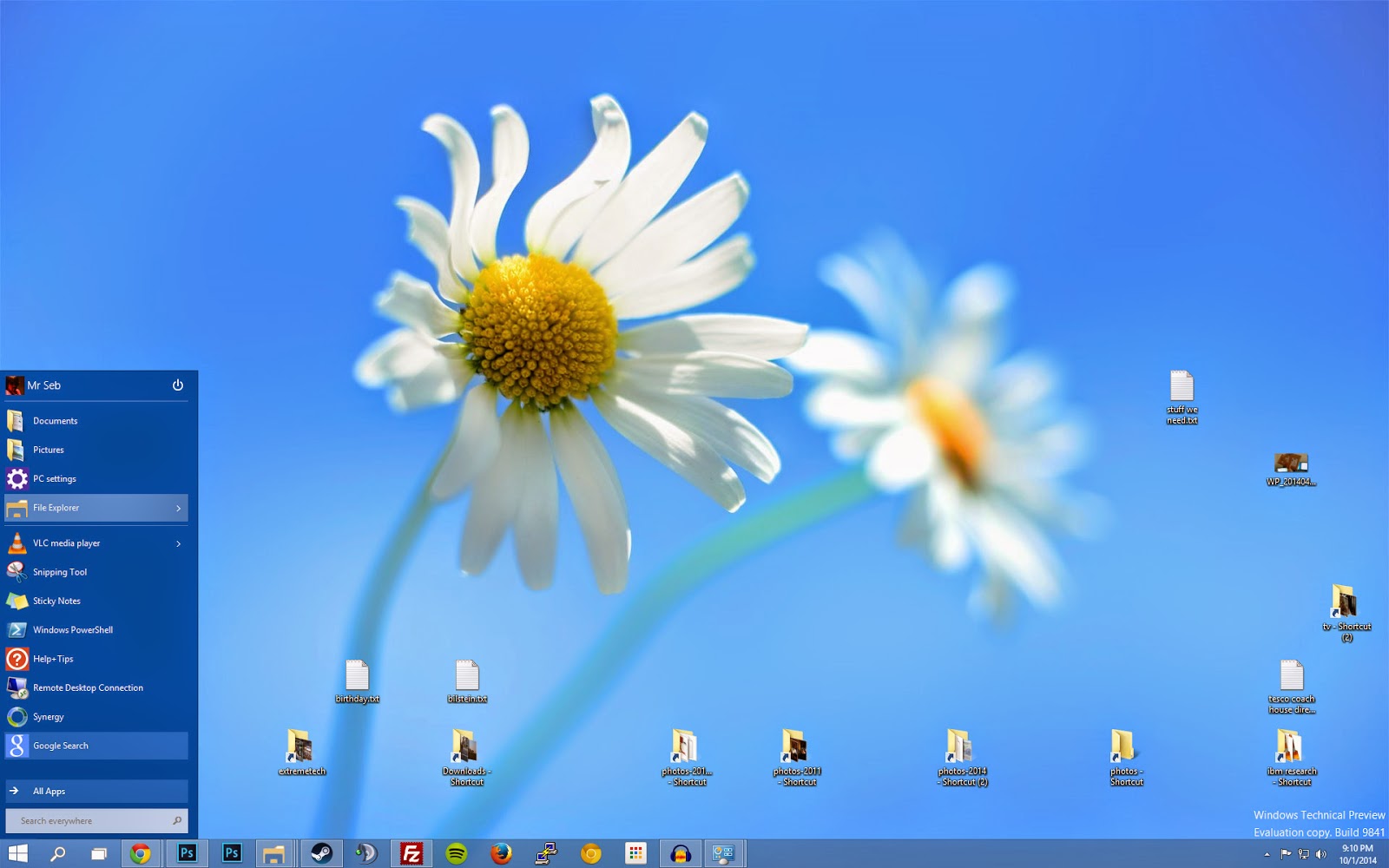 Here is a walk thru demo:

You can get the ISO below offered in 32 and 64 bit versions:
http://windows.microsoft.com/en-us/windows/preview
Posted by PC, Music, & Movie Geek at 9:19 AM

Get Windows 10 Virtual Desktops in Win8 or Win7


The Windows 10 Technical Preview includes a new feature called multiple virtual desktops. This has been a free utility for any Windows version for a while using Dexpot. Below is information on this and where to get it. Enjoy. 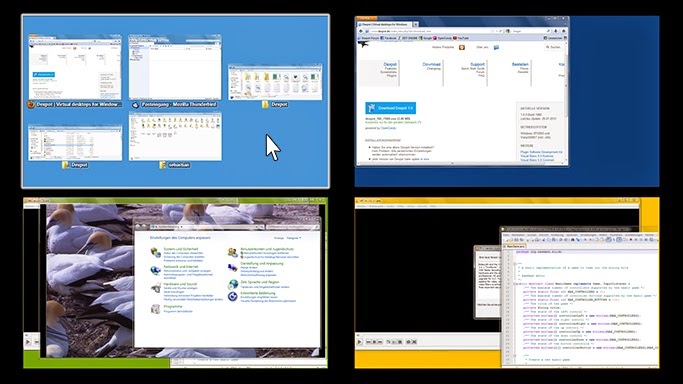 Large desktop workstations often have more than enough screen real-estate: One or two 24-inch monitors afford plenty of room for a mission-critical application, plus several chat or email windows alongside. But if you're a laptop user squeaking by with a single 15-inch monitor (or perhaps something even smaller), a virtual desktop might be the next best thing to an extra monitor. Dexpot (25 Euros, which is $33 on 2/21/12; free for personal use) is a great way to get yourself one. Or five.
If I had to describe Dexpot in one word, I'd pick "customizable." I can't think of a single aspect of Dexpot you can't customize: the animation (or lack thereof) used to switch between virtual desktops, the number of desktops, hotkeys and hot corners for switching desktops using keyboard and mouse, whether or not a virtual desktop spans all your monitors are just one, and the list goes on.
When an application decides to go all-out on customization, the result is usually bloat. Dexpot tries to let you eat your cake and have it, too, by compartmentalizing features into plug-ins you can enable or disable as you prefer. Disable the animations plug-in, and sure enough, the animations go away—and so do the options for controlling them. So not only can you customize the options to your liking, you can customize whether or not the options are even there to begin with.
Using virtual desktops productively is a learned skill. That's because it's a paradox: A GUI assumes being able to see your applications. Hide them in an imaginary desktop, and you might well forget to come back to them later. To overcome this, Dexpot includes visual hints keeping the virtual desktops and the applications they contain in view. True to form, Dexpot offers several such features, ranging from a tiny indicator in the system tray showing the number of the desktop you're on, through a compact desktop switcher built into the Windows taskbar, all the way to an Exposé-like feature that tiles your screen with scaled-down versions of all windows from all desktops, so you can easily click the one you want without having to think what desktop it's on (you can't get to it by typing its title, though). There's also a full-screen preview mode, subdividing the screen into separate desktops which you can then drag windows between.
When relegating a window to another virtual desktop, some users prefer to have it disappear from the Alt-Tab task switcher and taskbar; others prefer to have it stay there. Dexpot leaves this up to you, making it easy to experiment.
Dexpot's staggering array of plug-ins and fine-grained configuration options means that to benefit from the application you need only agree with its basic premise, that virtual desktops can be a useful thing. The rest is negotiable, flexible, and adjustable.
Being able to customize everything means you might have to experiment with Dexpot for some time, until you hit a combination of settings that make sense for you. But if you take the time to do this, you might realize that a single 15-inch monitor is not so small after all.
Note: The Download button on the Product Information page will download the software to your system.


You can download Dexpot here:http://dexpot.de/?lang=en
Posted by PC, Music, & Movie Geek at 4:09 PM


Today Microsoft officially announced the next version of Windows, which was expected to be called Windows 9, or maybe Windows One, or even maybe just Windows. But it’s Windows 10. Here are the highlights.


The short version is that Microsoft has realized that desktop users really were unhappy with Windows 8, and this version of Windows focuses on using the desktop.  Windows 10 aims to unify everything together, so it’s one platform and one store for everything across all devices. Apps written for Windows 10 will work on Windows tablets and even Windows Phone.
Note: these screenshots were taken directly from the announcement post. We’ll have our hands on the actual release in the next day or so and will be talking more about how it all works once we get into the details ourselves. You can get your hands on Windows 10 from preview.windows.com at some point in the next day.
UPDATE: The download is live and here is how to install Windows 10.


The Start Menu Is Back

By far the most important thing about Windows 10 is that the start menu has returned, and now you can pin all of those Metro tiles directly to the menu. You can resize it and customize it however you would like. 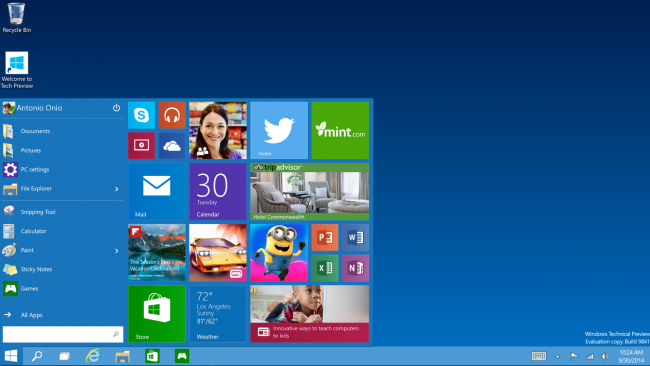 We’re not quite sure what they are being called these days, but all of those Windows Store applications can now be run in a window on the desktop just like everything else. On a tablet they can still run full screen, of course, but on a desktop or laptop, they will run like a regular desktop application.

That means you can tile them or switch between them just like you would expect, and it also means that they will finally start to become useful, and maybe we’ll see better apps created by programmers that weren’t interested in writing apps only for touch devices before.

To make switching between applications more easy, there’s a button on the taskbar that opens up the task switcher view.

That task switcher button also exposes a new feature that has finally been added — virtual desktops. Sure, you’ve been able to use this with third-party software for years, but it’s finally integrated directly into the operating system.

For more on the features, you can watch their announcement video.

Some of the other things we know about Windows 10 right now:


Getting Your Hands on Windows 10

According to the announcement, you’ll be able to get your hands on the Technical Preview through their new Windows Insider program, which we understand will be open to everybody and available at this URL:
http://preview.windows.com
We’ll have a copy in our hands soon and learn as much as we can. The one thing we can tell you right now is that you shouldn’t install this on your primary PC, since it’s just a preview.
UPDATE: The download is live and here is how to install Windows 10.